Home//News//Blog//Spotlight on HAIM: 8 Things You Need to Know About the Female Trio 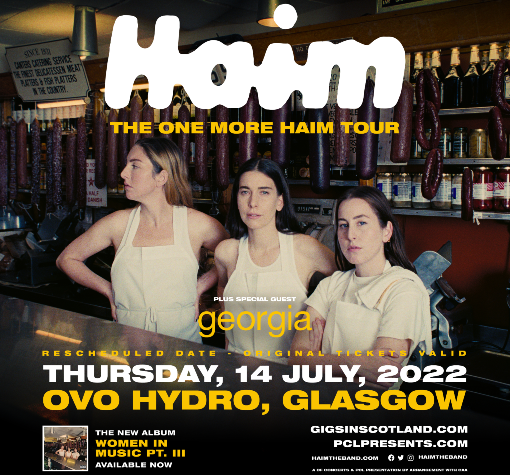 Spotlight on HAIM: 8 Things You Need to Know About the Female Trio

Pop-rock band Haim are bringing their massive One More Haim Tour to the OVO Hydro on the 14th of July, in support of their third album Women In Music Pt. III, which came out on 26 June 2020. UK fans are also being treated to an opening set from popular musician Georgia.

Ahead of their OVO Hydro show, we’re bringing you everything you need to know about the dynamic female trio.

The Band Members are Sisters

Haim are made up of three sisters: Este (bass guitar and vocals), Danielle (lead vocals, guitar, and drums), and Alana Haim (guitars, keyboards, and vocals). Needless to say, Danielle, Alana and Este have come a long way from their angsty teen years jamming in their parents’ living room in Southern California.

They Come From a Musical Family Background

They grew up in a family of musicians and began their journey into the industry in a cover band called Rockinhaim, alongside their parents, which they were all in together for more than a decade.

They are Jewish Pop Icons

Their Israeli-born father, Moti, who was a professional soccer player before emigrating to California, instilled great pride in their Jewish heritage while the girls were growing up, and naturally, that cultural identity became part of their music.

What Does the Word “Haim” Mean?

The word "haim" means "life" in Hebrew, which by itself you might not recognize, as it's more commonly seen as "l'chaim" and used within the context of toasting to health and happiness over a drink.

Alana Haim is an Award-Nominated Actress

Two of the Sisters Were in Another Successful Band

Before they started performing as a trio, older sisters Danielle and Este, were members of the pop-rock group the Valli Girls, which found a fair amount of its own success.

They Were Once Signed by Jay-Z

Roc Nation, founded by Jay-Z in 2008, started working with Haim in mid-2012. By the end of that year, the band had landed a recording contract with Columbia Records, home to Adele, Bruce Springsteen, and Barbra Streisand, among many other iconic artists.

The sisters are proficient on more than one instrument: Este plays both guitar and bass, Danielle plays guitar and drums, and Alana plays guitar, keyboards and percussion.