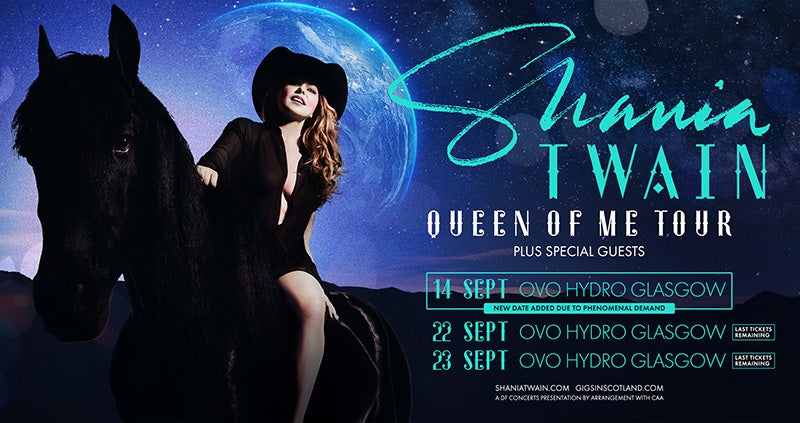 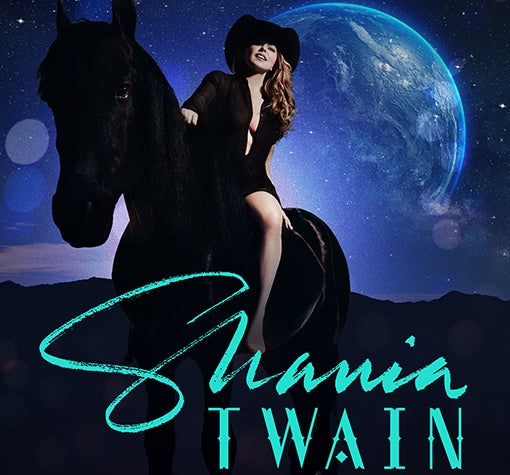 Queen Of Me Tour

Gearing up for another monumental chapter, five-time GRAMMY® Award-winning legend and the best-selling female artist in country music history Shania Twain will release her new album, Queen of Me, on February 3rd 2023. It notably stands out as her sixth original full-length offering and first record since 2017.

Rumours of a new tour began circulating on the internet in recent months and fans will be delighted to hear that, to celebrate this next era in style, Shania will embark on the Queen of Me Tour across the UK and Ireland. The tour marks the first time fans will get to see the queen in all of her glory in nearly five years. The Queen of Me Tour kicks off on Saturday September 16th at London’s O2 Arena, and stops in Dublin, Glasgow and Manchester before wrapping up in Birmingham on Tuesday September 26th.

Additionally, Shania and Live Nation have announced that £/€1.50 per ticket sold (less deductions for tax and royalties) will be donated to Shania Kids Can (“SKC”). Established in 2010 by Shania Twain, SKC provides services that promote positive change in children’s lives in times of crises and economic hardship. SKC provides children with one-on-one consultations, academic support and group activities, as well as nutritious snacks and meal programmes where needed, all while in the safe, confidence-building environment that is the Shania Kids Can Clubhouse. These children are learning the skills to cope with and overcome family hardships which, in turn improves their ability to succeed in school. For more information about Shania Kids Can, please visit: www.shaniakidscan.com

She excitedly heralds the highly anticipated album with new song “Last Day of Summer”, offering fans a taste of what to expect from the upcoming new album. The track unfolds as a nostalgic and cinematic anthem set in the final moments of everyone’s favourite season. Delicate guitar melts into a steady beat and screen-worthy strings as she nostalgically recalls, “The last time we were together the first thing I remember every time September comes.” Shania will make it feel like summer forever, like only she can…

This follows the single “Waking Up Dreaming” which headed straight onto the BBC Radio 2 playlist upon release as Shania dropped by Zoe Ball’s Radio 2 show and The One Show to celebrate the new music. She’ll also join the panel of ITV’s Starstruck for its second season, set to air in 2023, alongside Adam Lambert, Beverly Knight and Jason Manford.

Shania Twain continues to be one of the world’s most popular artists, with over 100 million global album sales and 330 million streams in the UK alone. Her third studio album, Come On Over, is the UK’s 15th biggest selling album of all time. Her recently released blockbuster, career-spanning Netflix documentary, Not Just A Girl, was praised by NME, The i, Stylist and more for reminding audiences of her status as a cultural icon and music industry pioneer. Notable celebrity fans include Taylor Swift, Post Malone, Lewis Capaldi, Kacey Musgraves, Haim, Avril Lavigne and Harry Styles, who invited Shania to perform with him when he headlined Coachella earlier this year.

SHANIA TWAIN "QUEEN OF ME" VIP PACKAGE
Package Price        £695 with Service Charge of £22.50
Package details        Reserved ticket in row 1 or 2
On stage during a song in the set with Shania!
Access to the “Queen Of Me” preshow lounge including
" .    Cash bar and (2) drink tickets per person"
" .    Light appetizers and desert bar"
" .    Red Carpet photo opportunity to commemorate your evening "
" .    Photo booth and more! "
VIP merchandise item, exclusive to this package only
Autographed exclusive poster, specially designed for VIP packages
Tour VIP laminate
$75 merchandise voucher to be used in the Shania Twain online store
Crowd free merchandise shopping opportunity