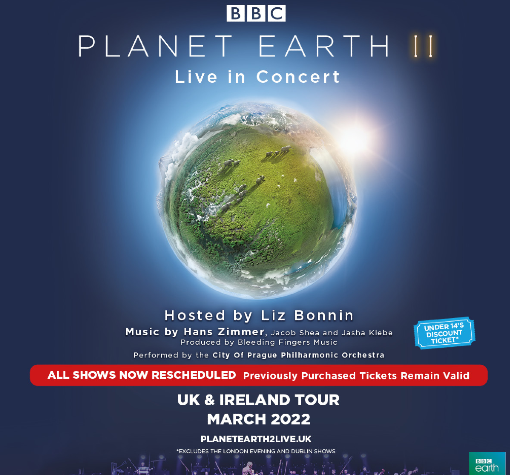 Planet Earth II Live in Concert, originally rescheduled to play the OVO Hydro on 19 March 2021 will now take place on 27 March 2022. All previously purchased tickets shall remain valid for these rescheduled dates.

Planet Earth II Live in Concert, from BBC Studios and the acclaimed BBC Natural History, is finally set to thrill audiences across the UK & Ireland with eight prestigious arena performances in March 2022.

These spectacular live concerts will be hosted by science and natural history TV presenter Liz Bonnin, with behind the scenes insights from Mike Gunton, the executive producer of the BAFTA and EMMY® award-winning BBC television series.

Featuring breathtaking specially-selected footage shown in 4K ultra high-definition on a gigantic LED screen, audiences across the UK will get to rub shoulders with our acrobatic primate cousins in the steaming jungles of Madagascar, race alongside fearsome hunting lions in the remote sandy deserts of Namibia, face stormy Antarctic seas with a family of penguins and feel the raw tension as a baby iguana tries to escape the clutches of deadly racer snakes in what has become an iconic piece of footage. And they will no doubt tap their toes along with dancing grizzly bears and be swept away by the bravery of a mother snow leopard.

Zimmer, renowned for his work on the likes of Gladiator, Interstellar and Blade Runner 2049, but said that the landmark BBC series stood out amongst his work, said. “Planet Earth II is one of the most amazing things I’ve ever been involved in: some of the greatest action scenes ever put on film, some of the most emotional, epic, fragile scenes I’ve ever witnessed. Filmmaking at its absolute peak.”

Host Liz Bonnin, who has a Masters in wild animal biology, has presented over 40 primetime programmes including Blue Planet Live, Super Smart Animals, Galapagos, Horizon and the landmark BBC One documentary Drowning in Plastic.

Bonnin said, "The past two years have been incredibly difficult for everyone, and I hope our tour can play a small part in offering joy, healing and optimism. It will be an uplifting experience, celebrating the majesty of life and all the beauty and wonder that Mother Earth has to offer. I'm all the more excited to be able to share it with you.”