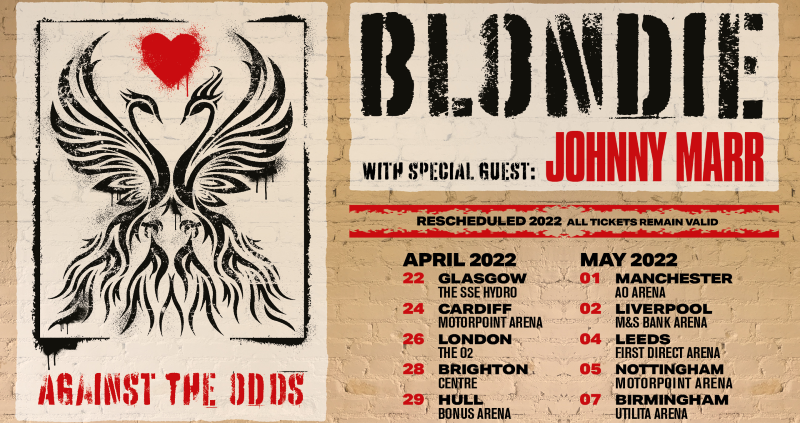 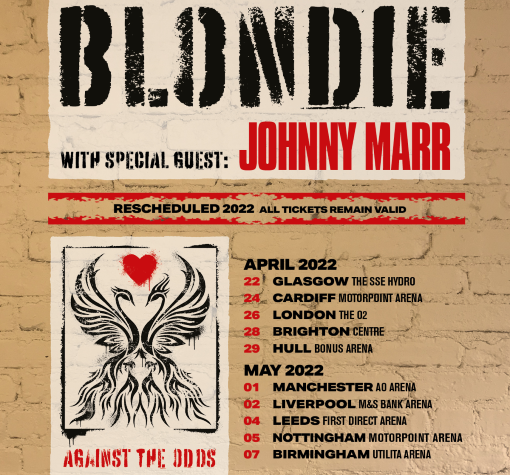 Blondie - Against The Odds Tour

Blondie, originally rescheduled to take place in The OVO Hydro on 20 November 2021 will now take place on 22 April 2022. Original tickets remain valid for the new date.

Please note Garbage will no longer be supporting on this tour. The new support will be: Johnny Marr.

‘Against The Odds’ UK Tour

Blondie, one of the most influential bands to emerge from New York’s punk scene, have announced their 10 date UK tour is to be postponed until April - May 2022, their first UK tour in 5 years. Iconic frontwoman/songwriter Debbie Harry, guitarist/conceptual mastermind Chris Stein and powerhouse drummer Clem Burke, are eager to get back on the road, along with long standing band mates bassist Leigh Foxx, guitarist Tommy Kessler and keyboardist Matt Katz-Bohen.

Blondie welcomes legendary guitarist, The Smiths co-founder and Blondie collaborator, Johnny Marr for the rescheduled dates, as Garbage will no longer be a part of the tour due to scheduling conflicts.

Debbie Harry says, “Having collaborated with Johnny on Blondie’s last album, Pollinator, and with plans for a new collaboration on our next album, we are looking forward to a long overdue return to the UK, and even better, to sharing the stage with the inspirational musical influence that is Johnny Marr.”

Clem Burke adds, “It is a disappointment to have to postpone our UK tour until April 2022. We will now be joined by our special guest & friend Johnny Marr. We’re happy to continue our relationship with Johnny that began with his contribution to our last album Pollinator. Looking forward to seeing all our UK fans in the Spring.”

“I’m delighted to be going out with Blondie, to hear those classic songs every night, and be in the presence of twenty first century heroes.” – Johnny Marr